Jade Barget is a young french curator selected in 2020 for the travel and research grant in Germany. She shares with us her explorations during her stay in Berlin and Frankfurt am Main in an essay entitled “Notes on the Movement of the Flesh, the Mind, and the Sun” (2020).

Berlin dances through dusk and dawn; it is a city where the night stretches and expands and where the movements of bodies sculpt time. There, I wanted to study the role of dance and choreography in contemporary visual art and curatorial practices, and to reflect on the potential of thinking through dance. The Young Curator programme from the Institut Français has allowed me to do so.

Born of my fascination for the forces and limits of moving images, this project dives into how artists, by means of embodied practices, work with and against the representational logics of images. On the edge of vision, through dance and choreography, the artists that I met investigated affective, physical, and spiritual realms.

During October 2020, in between two pandemic confinements when bodies were moving slower, I made my way to Berlin and Frankfurt to meet the artists inspiring my research. Here, through field notes, I developed several avenues of reflection.

Dancer and choreographer Justin F. Kennedy is interested in states rather than forms. He explores the capacity of movement, repetition, and duration to alter consciousness. Delving into a large register of embodied experiences including religious rituals and mystical or hedonistic practices, Kennedy develops exercises with which to experiment with liminal states. These liminal states comprise the disorientating phase in the middle of a rite of passage, where the subject has left their pre-ritual status, but has not yet reached their post-ritual condition. In this zone, preconceived notions of time, community, or identity dissolve; it is a space of pure possibility.

The cave raves that Kennedy organises as a prelude to his performances are one example of his investigative exercises. Recreating the atmosphere of a club, he invites performers and the audience to listen, let go, and dance to an electronic music set for a few hours. By reaching an altered state, the dancers are ready to perform and the audience is ready to witness differently. During the Berlin Biennale B11, Kennedy and Emma Howes presented UNFURL: a lucid sci-fi opera in collaboration with Balz Isler, Ethan Braun, Nkisi (music), and Beate Huss (costumes). This time, COVID-19 restrictions did not allow for a public cave rave. Instead, it was held privately for the performers, allowing them to transform and transcend states from which the performance then flowed. Central to this practice is the state of trance, from which the performance is generated, rather than the image or form of the cave rave. 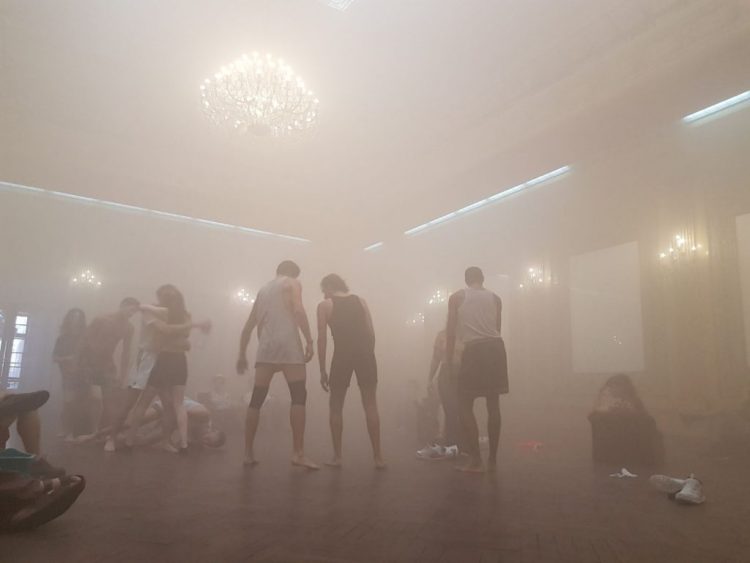 Liminality holds a central place in Jeremy Shaw’s work, with whom Justin F. Kennedy collaborates as choreographer. Shaw’s work confronts the audience with the impossibility of translating liminal experiences into visual or spoken way. In this threshold space we cannot define visually, in the interstice of the untranslatable, the artist explores the potential of this constructive and destructive stage.

Shaw explores liminality through religion, mystical practices, drugs, technology, music, and dance. In the Quantification Trilogy (2020) and Phase Shifting Index (2020) exhibitions at the Julia Stoschek collection and at Frankfurt’s Kunstverein respectively, dance and choreography hold a prominent role. The most recent film of the trilogy presented at Stoschek, I Can See Forever (2018), is set in a future where science has quantified transcendental experiences. What follows is an abandonment of spiritual practices and, subsequently, the incapacity to reach liminal states. The protagonist, Roderick, played by dancer Roderick George, is one of the rare persons still able to ‘see forever’, to reach liminality by dancing. Much like dance, which can be communicative, this liminal state is contagious and is transmitted to the projection room. 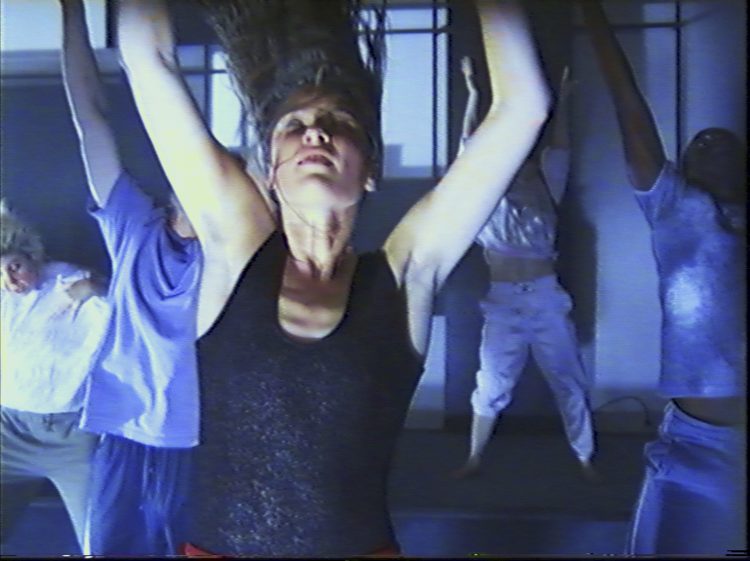 By means of several mechanisms, Shaw draws us, as spectators, close to a liminoid experience. The film’s narration is long and complex; the language is invented, and the subtitles are replete with technical terms. Further, Shaw confuses our temporal references by using outdated technologies, such as VHS, to recount the future. We bask in cognitive dissonance. Eventually, Roderick begins to dance. The sound changes and the volume increases. This, together with the virtuosity of the dancer’s movement, combines to create a form of release, a rush, and after the disorientation comes catharsis. Then, the breaking point. The body pixelates, distorts, and the image is thrown into crisis. We, as spectators, slowly lose hold of visual references, until the complete destruction of the image.

We flow along with the turmoil. The ‘seeing forever’, which we will never grasp, is not fully represented here, but rather given in small doses. Dance, the mind-altering practice of disembodiment and departure of the real, extends into the exhibition room through its communicative and expansive nature — its capacity to touch audiences and to be touch by them. Dance fleshes out the films; they are presence rather than representation.

Thus, the audience is a participant in the experience, or choreography. Such dancing with was even more prevalent in the Phase Shifting Index exhibition, an eponymous installation of seven screens running through Frankfurt’s Kunsteverein building. Each screen displays a group engaging in different corporeal practices. Walking around the space, the films’ various scenarios mesh in a confusing buzz. Eventually, the tracks and films synchronise into one choreography, modifying the audience’s pathway, tempting viewers to take up a distant vantage in order to obtain a panoramic vision of the whole routine.

Dr. Gabriele Brandstetter, professor of theatre and dance studies at Berlin’s Freie University, describes choreography not as an art to create a dance, but as a procedure of anordnung (of agencing, of arranging). Such arrangement can also involve the presence of the spectator, who is not aware of a mise-en-scene, but is a participant in the choreography which she or he completes and realises through movements, actions, and reactions (1). The audience, moving through the Phase Shifting Index exhibition, engages in an active spectatorial experience, a visitation which is also a co-authoring of the choreography.

The spectator’s movements, actions, and reactions, as noted by Brandstetter, can be physical, which is evidenced in Shaw’s Phase Shifting Index. They can also be psychological. The audience, captured and seated, can drift mentally, akin to Jacques Rancière’s emancipated spectator. This invisible movement is something that interests the artist, performer, and choreographer Juan Pablo Cámara. He scores his performances only partially, leaving interstices for the audience to use in influencing the performer, thus drawing the spectator into the composition. In conversation, Cámara shares his vision, that choreography as the sculpting of affect in time and space. For him, choreography is the sketching of a state of mind, the moulding of sensations, the shaping of emotions.

Cámara, in the context of his performance in progress, ?latin0, due to be presented at Tanztage Berlin this year, deconstructs a Latin-American Top 40 and its associated dances, such as twerking and cumbia. In doing so, he attempts to seduce the audience. This undertaking, this effort at constructing an intimate and sensual relationship with the audience, exposes Cámara — made vulnerable, he flirts with failure. Indeed, working with affect, the artist surrenders control of his medium; he refuses mastery and accepts dispossession. This form of vulnerability is central to Cámara’s work, who, in this fragility, finds a basis for exchange with the audience. This openness to the erotics of the other alters the proximity between performers and spectators, reducing distances in order to touch and be touched by each other. 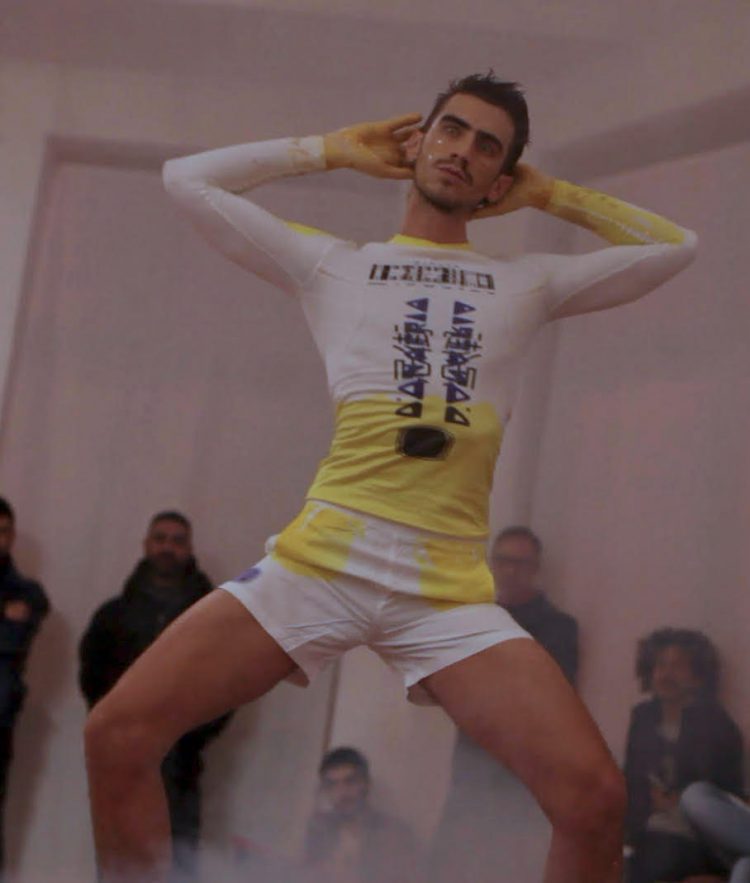 In Cámara’s work, bodies react both to their environment and to other bodies in close proximity; they influence one another in awkwardness or in pleasure. The choreography — its flow of affect — creates a continuum in which the limit of the self is blurred. In this space of exchange, a modality of relation between beings takes form, an intersubjective texture.

Can we think of this relationship, this intersubjective texture, beyond human-centric terms? the artist Nile Koetting introduces animism to his choreography. Decentering the body, Koetting welcomes objects, audiences, and the space into the work; his installations are populated by robots, screens, household electronics, plants, performers, and many other things and beings. The artist conceptualises such installations as choreographed performances, opening the way to a more-than-human perception of choreography.

Expanding further, Koetting invites natural elements into his choreography. In a work titled Sustainable Hour (2017), Koetting incorporated solar panels in his installation, which also served as sources of energy to the connected elements of his work. During darker days, the performance came to a halt. In close collaboration with the sun, Sustainable Hour was a performance following the rhythms of nature rather than the institution. 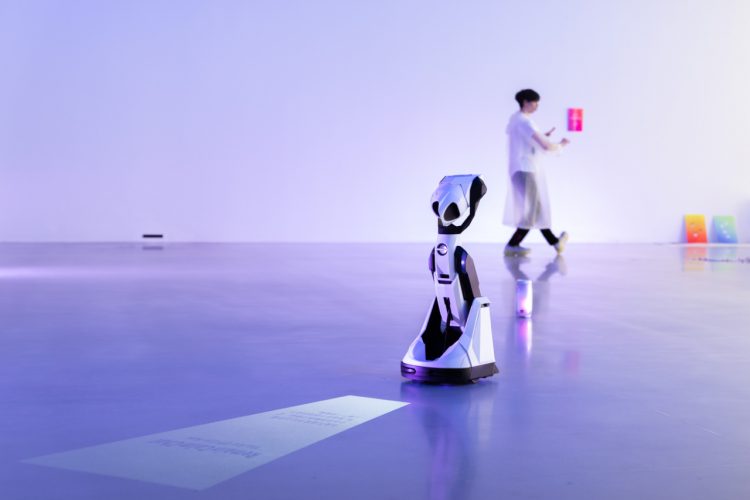 Koetting further underlines the choreographic role of natural elements in Remain Calm — an iteration is currently on view at the Palais de Tokyo’s exhibition Anticorps. Remain Calm is inspired by natural disaster evacuation exercises; these are common in Japan, where the artist grew up.

During a discussion, Koetting quoted Bruno Latour’s Down to Earth: Politics in the New Climatic Regime, in which the author points at how the position of centrality humans have granted themselves within the environment is currently being challenged (2). More than ever before, climate change and other related natural disasters are reminding us that we are not alone on stage, nor are we directing the play. Unforeseen collapses shake our established scenarios of evolution and suggest other ends. By presenting the intrusion of elements in his performances, in recognising their role in the act of choreography in its expanded sense — in choreographing with — Koetting invites us to think of alternative modes of co-existing.

Choreographed by the COVID-19 pandemic, I returned to France for the second lockdown of 2020 and wrote these notes in between movement and stasis, shaped by my encounters and spectatorial experiences. These experiences made me feel dance as an exercise of embodiment and disembodiment, of breaking out and shattering, of entering in crisis; it is a practice of leaving the real and of expanding subjectivity. Through the performances and films I have watched, I perceived the elasticity of choreography and dance, their capacity to expand and spill out to incorporate what happens in the room, including the décor, the audience, the space, the institution, and the natural elements. Thus, choreography appeared to me as the creation of a space-time for moving with, an impossible struggle at orchestrating what can be sculpted — the body— and what cannot —affects, states, or the sun. An attempt not to prescribe movement, but to agitate the forces that we cannot see but still feel.